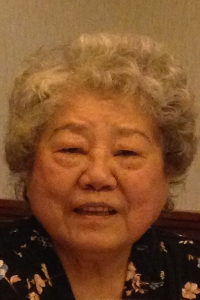 Katie was born in Dae Gu, South Korea a daughter of the late Soo Bong Cho and Wal Kum Kim. She grew up in Dae Gu where she was educated. She immigrated to the United States with her husband in 1956, after meeting during the Korean War. She worked for over 20 years as a candy packer for Schrafts Candy Company, where she would often bring delicious candy home for her children. She later worked as a housekeeper for the Marriott Long Wharf for several years. Katie was an avid gardener and cook. Every Sunday, while her children were growing up, she would make the best fried chicken, boiled dinners, Italian, and Korean meals. She enjoyed watching classic movies, especially religious ones. Katie was an independent woman who would make her weekly shopping trip to Haymarket up until she recently became ill. She was a devout Catholic and attended Mass every week at St. Anthony's Shrine in Boston.

Relatives and friends are invited to attend Katie's Funeral Mass on Friday, September 16, 2022 at 11 A.M in St. Mary's Church, 55 Warren St. Charlestown. A family receiving line will be formed at 10:30 A.M. Parking attendants provided. Her burial will be at Woodlawn Cemetery in Everett. There are no funeral home visiting hours.

In lieu of flowers, kindly make a memorial donation in Katie's name to: