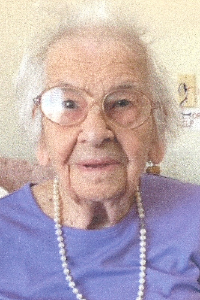 Delinda G. “Dolly” (Delgado) Bragaul, age 103, formerly of Norton, passed away peacefully, in the presence of her loving family on Sunday, September 11, 2022 at the Garden Place Healthcare in Attleboro. She was the wife of the late Anthony S. Bragaul.

Dolly grew up and was educated in Norton. She had made her home in Attleboro and for ten years in Florida and was a former longtime Norton resident. While residing in Florida, she worked in the gift shoppe at Walt Disney World and was previously employed at the former Texas Instruments in Attleboro.

A communicant of Saint Mary’s Church in Norton, Dolly was always happiest when surrounded by her adoring family. Her hobbies included playing bingo and crocheting.

Her Funeral Mass, to which relatives and friends are cordially invited to attend, will be celebrated on Monday, September 19th at 11:00 A.M. in Saint Mary’s Church, 1 Power Street, Norton. Burial will follow at the Norton Common Cemetery in Norton.

Visitation will be held prior to the services on Monday morning from 10:00-11:00 A.M. at Saint Mary’s Church in Norton.

In lieu of flowers, Dolly’s family has requested that donations in her memory be made to Saint Mary’s Church, 1 Power Street, Norton, MA 02766.

Arrangements are under the care and direction of the Norton Memorial Funeral Home, 19 Clapp Street, Norton.