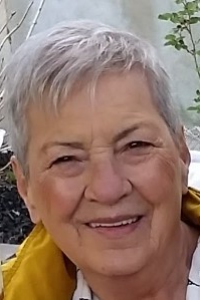 She was born to parents David J. d’Entremont and Redina A. (Surette) d’Entremont, on 21 November 1941 in Boston , MA. Gail graduated from St. Clare High School in Roslindale, MA. She went on to study at the Benjamin Franklin Institute of Technology and graduated with an Associates degree in electrical engineering.

Gail worked as a secretary and copy room manager for 12 years for the City of Boston School Committee. She enjoyed watching the Boston Bruins, naming Johnny Bucyk and Bobby Orr as her favorites. She loved to tell the story of telling her doctor that she had a family of “puck heads” to which he replied, tongue firmly in cheek, “that makes you the mother pucker.” Gail had a talent painting in water colors. She enjoyed watching the Boston Celtics with her partner Joe O’Donnell. She also enjoyed family cookouts where she could interact with her extended family.

She was preceded in death by her parents David and Redina, her husband William, brother James and wife Patricia, brother Kenneth and wife Rosemary, sister Joan and husband William MacDonald, and son-in-law Charles Lewis.

The family has entrusted Joseph W. Casper & Sons Funeral Home with the arrangements. A Celebration of Life is scheduled for Saturday September 17, 2022 12pm to 2pm at 187 Dorchester Street, South Boston, MA.