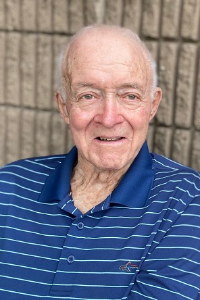 He was raised in Woburn and attended Saint Charles and Woburn High School Class of 1953.

Upon graduating, Charlie was drafted into the US Army and proudly served his Country while stationed in Germany.

After his service he met his Wife Leonora (Chick) A Doherty also of Woburn, and it was love at first sight. They were married in July of 1959, started their family in 1960 and moved to Tewksbury in 1964.

Charlie and Leonora were married for 44 years until her untimely passing in 2003.

For almost his entire career Charlie was employed by MIT @ Lincoln Lab in Bedford where he worked for 44 years having never missed or was late a single day, before finally retiring in 2013.

He enjoyed his Tuesday Golf Leagues and Golf Trips with his friends from the Men’s Club, K of C and Tewksbury PD.

You could find him every Saturday and Sunday morning at Deli King with those friends and his family for his usual breakfast!

Charlie was fortunate enough to find love twice in his life. You could always find him and his very dear friend Mary Maguire, of Tewksbury on one of their many dinner dates. Mary has been so much a part of our Family for more than 15 years, just as Charlie had become a part of hers.

Calling hours are Monday, September 12th, from 4-8 p.m. at the Farmer & Dee Funeral Home, 16 Lee Street, Tewksbury. His funeral procession will begin on Tuesday, September 13th, at 9 a.m. at the funeral home, followed by his Funeral Mass at 10 a.m. at St. William’s Church, 1351 Main Street, Route 38, Tewksbury. Interment at Tewksbury Cemetery. In lieu of flowers, donations in his memory may be made to Tunnel to Towers Foundation at www.T2t.org