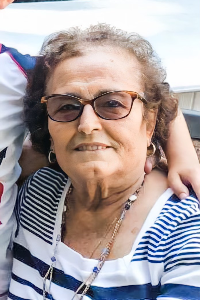 
Anastasia Bonos, of Somerville, passed away on Wednesday, September 7th. She was 82.
Born and raised in Meligala, Messinia, Greece. She was the daughter of the late Sotirios and Eleni (Zoe) Kourtis.

Anastasia had a natural green thumb. Her flowers and veggies in her garden were constantly growing and blooming. She was a woman of strong faith and was very active in her parish. When Anastasia was not at church or in her garden, she was spending time with her grandchildren, being a Yiayia was her biggest passion.

Anastasia was the beloved wife of 40 years to the late Christos Bonos. She was the devoted mother to Ethel Bonos of Somerville, and Ernest Bonos and his wife Michelle of Arlington. Loving Yiayia of Christos and Sophia Bonos. She was the loving aunt of Lefkothea Lynch, Nicholaos Bonos, James Bono and Panagiotis Lehouritis. She is also survived by many loving family members.

A service will be celebrated in the Dormition of the Virgin Mary, Greek Orthodox Church, 29 Central St., Somerville, on Tuesday, September 13th at 11AM. Visiting hours will be held in church from 10 to 11 AM all relatives and friends are respectfully invited to attend. Services will conclude with burial at Oak Grove Cemetery, Medford.

In lieu of flowers donations may be made in Anastasia’s name to the Dormition Of The Virgin Mary, Alter Fund, Greek Orthodox Church, 29 Central Street, Somerville, MA 02145 or to www.changetheworldprogram.org