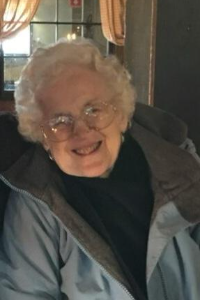 Dorothy Louise Collamore was born in Essex, Ct. on Dec. 19, 1924, to John and Louise
Collamore. Before her 5th birthday her mother Louise died of breast cancer and the Great
Depression started. Her father raised her and her older sister Lillian, living more secure than
many during the Depression as her father delivered fuel oil. After graduating from high school,
she helped the WW II effort by working at a boat construction yard in Essex. Edward had joined
the Army in 1943, while still serving Edward and Dorothy were married on March 1, 1945 and
lived in Alabama for the duration of the war. After the war they returned to Essex and had three
sons.

Dorothy remained focused on the three boys, being a Cub Scout Den Mother at one point. She
was passionate about the boys getting good educations, playing organized sports, and attending
church regularly as members of St. John’s in Essex.

Dorothy and Ed relocated to the Stonington/Mystic area in 1964 where they joined the St. Mark’s
Church in Mystic. Her three boys all graduated from Stonington High School. Following Ed’s
retirement in 1986 they traveled extensively and remained active at St. Mark’s and with the local
Barbershop Chorus and quartets.