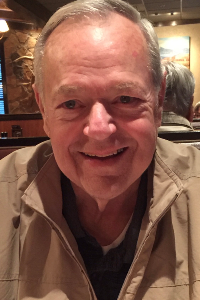 David J. Lemieux, 78, died Thursday, September 8, at the Good Samaritan Hospital in Brockton after a lengthy battle with complications due to Parkinson's Disease while surrounded by family.

Born in Brockton, he was a 1964 graduate of Duxbury High School and enlisted in the United States Marine Corps in 1965. After leaving the service, David spent many years as a car salesman with Capeway Motors of Whitman and later went into business with a partner to establish K D Vending.

David (Papa) had a sparkle in his eyes when his grandchildren entered the room and loved spending time with them. His hobbies included gardening and cooking so he could share his creations with family and friends. He was an avid cardplayer who was quick with a joke… laughter followed wherever he went.

David is survived by his loving wife and best friend of 29 years, Dorothy A. Lemieux, his daughter and son-in-law Samantha & Ryan Lofgren of Abington and was the proud Papa to their 4 children: Daniel, Adalyn, Austin and Audrey Lofgren. David was also the loving father to the late Daniel Helms of Whitman and the son of the late Helen & Arthur Lemieux of Duxbury. He came from a large family and was brother to Jane Lemieux and Mary Fitzgerald of Kingston, Judy Kent of Florida, Ellen Waldrep of North Carolina, Anne Howard of Virginia, the late Arthur Lemieux, William Lemieux and Louise Kelleher. He was son-in-law to Shirley Greenough and the late Roger Greenough of Abington, brother-in-law of William & Lisa Dodge of Abington, Terry & Mary Haas of NC, John & Kieran Dodge of Hanson, Daniel Greenough and Bridie Connell of Abington and Kevin & Angel Greenough of FL and had numerous loving nieces and nephews.

Funeral Services will be held on Thursday September 15th at 9:45AM from the Blanchard Funeral Chapel, Plymouth Street (Rte. 58 @ the rotary) followed by a funeral mass at 10:30AM in the Holy Ghost Church, Whitman. Visitation will be on Wednesday September 14 from 4:00-7:00PM.

In lieu of flowers, donations may be made in David’s memory to the below:
The Michael J. Fox Foundation for Parkinson’s Research
Grand Central Station, PO Box 4777, New York, NY 10163-4777