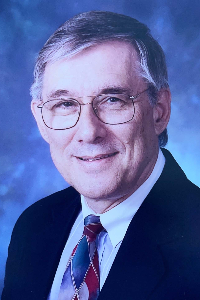 He was born on June 5, 1940 in Hartford, CT and raised there, the son of Walter and Stella (Kozlowski) Christensen. He graduated from Weaver High School and then earned a Bachelor of Music Degree and then a Master’s Degree in composition, both from the Eastman School of Music in Rochester, NY. He had lived in Webster since 1994.

He served as Executive Director of Music Schools in Hartford, CT, St. Louis, MO, New York, NY, and Waukegan, IL, where he also began his career in fundraising. Later, he served as a Director of Development and Communications for several nonprofit organizations and was “principal” in his own private consulting firm. For over 50 years, Bob raised millions of dollars for the arts, healthcare, religion, and education.

He was also a distinguished composer, having written more than 150 works, some of which have been performed by various choirs, orchestras, soloists, and chamber ensembles, throughout the United States. His music is published by Schaffner Press, GPC Publishers, Piano Guild, and Choral Arts Society.

A service to celebrate his life will be held on Saturday, September 17, 2022 at 11:00am at the Church of the Reconciliation, 21 North Main Street Webster, MA. Burial of the cremains will be in the churchyard Memorial Garden. Arrangements are under the direction of Sitkowski, Malboeuf & Hickey Funeral Home, 340 School Street Webster, MA 01570. In lieu of flowers, donations can be made in Bob’s honor to The World Hunger Foundation.