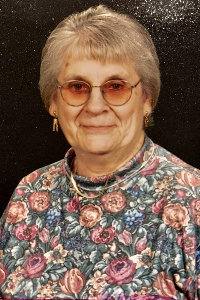 Biddeford- Beulah Marlene Osborne, 88, of Biddeford, Maine, died on September 7, 2022 at Biddeford Estates assisted living community. She was born the 4th of 8 children in Walkerville, MI on July 2, 1934, to Carl Comfort and Mary (Unger) Walker.
Beulah left the family farm in Walkerville in the early 1960s to move to Elkhart, IN., where she brought her strong work ethic to various jobs, including manufacturer L.E. Johnson. It was there she received a gold hinge for outstanding performance. She also met John Osborne, whom she married on December 1, 1966. They settled in Elkhart to start a family, and Beulah used her considerable homemaking skills to provide for her husband and two young sons.
The family moved to Winthrop, Maine in 1977 to care for John’s mother and brother. Beulah established herself as a fixture in the community over 30+ years by volunteering as a Cub Scout pack leader and at a church daycare and hot meal kitchen; in 2009 the town recognized Beulah’s selfless efforts at the hot meal kitchen with an award for community service. She also performed odd jobs as a seamstress, babysitter, and cleaning a camp plus a job as a dietary aide in a local nursing home. Beulah was fond of keeping in touch with her friends and family she grew up with in Michigan. She also loved to sew and crochet, and was a member of Winthrop’s CODA Chorus, a community choral group for many, many years.
Beulah was predeceased in 2018 by her husband John of 51 years. She is survived by her two sons, David Osborne and wife Wendy, and William Osborne and wife Anna; sister Cleone Colvin of Westville IN; brother Norman Walker of Holland, MI; brother Leo Walker and wife Fran of Allegan MI; brother Ted Walker and wife Jan of Zeeland MI; brother Ken Walker and wife Sally of Advance, NC; and several nieces, nephews, grand-nieces and grand-nephews.
Arrangements are with Chad E. Poitras Cremation and Funeral Service, Buxton