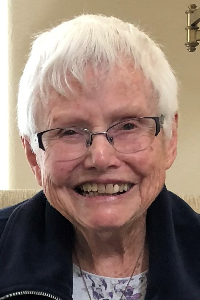 With much love and deep sorrow we mourn the loss of Martha Ann Smith, who passed away on August 30, 2022 in Ojai, California. Martha was born in Los Angeles on October 22, 1924 to Orrin and Margaret White of Pasadena, California. In 1945 she graduated from UCLA with a degree in bacteriology and was employed as a lab technician in Dr. Rupp’s office in Ojai for 30 years. She was an avid quilter and enjoyed traveling with a group of retired educators called The VCers. Martha was a parishioner of St Thomas Aquinas Church in Ojai for 70 years.

Martha is survived by her daughter Barbara Grimm of Ventura (Steven Grimm), three sons: Dave Smith of Ojai, Bob Smith (Jessica) of Ojai, and Larry Smith (Christine) of Oakhurst; Grandchildren: Brian Grimm, Jennifer Grimm, Gina Roberts, Katie Preston and Kyle Smith; Great- Grandchildren: Riley Roberts, Emery Roberts, Ryder Preston and Maxwell Grimm. She was preceded in death by her husband Robert Smith and sister Margaret Roberts. The family wishes to express their gratitude to The Artesian of Ojai and Mission Hospice for the excellent care she received over the past year.

Family and friends are invited to a memorial service for Martha on October 22, 2022 at 10 am at St. Thomas Aquinas Church in Ojai.