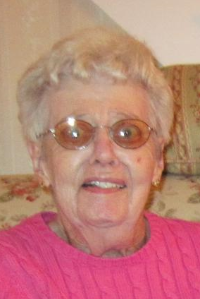 To live stream the Funeral Mass, go to https://www.harborview.live.

DEVINE, Maureen Frances (Mahoney) of Roslindale, died September 3, aged 86 years. Daughter of the late John and Bridie (Cashman) Mahoney, both originally from County Cork, Ireland. Wife of the late John “Joe” Devine. Mother of Mary Theresa and John (Katie) Devine, both of Roslindale. Grandmother of Jack Devine of Roslindale. Maureen was born and raised in Dorchester. She proudly graduated from Girls High School. After marrying John, she settled in Roslindale, where she raised her family, soldiering on after her husband’s early passing. She had a long career in government, first at Boston City Hospital and later with the state at Lemuel Shattuck Hospital. She was active in the church, particularly as a member of Our Lady’s Sodality and as a Eucharistic Minister. She was an avid bowler (candlepin, of course,) bingo player, and dancer. She was a member of the County Sligo Association. But none of this captures her outgoing personality. She was a friend of everyone she met. She will be missed. Visiting hours at the William J. Gormley Funeral Home, 2055 Centre St., West Roxbury on Thursday, September 8th from 4-8 pm. Funeral from the funeral home on Friday, September 9th at 9 am followed by a Funeral Mass in Sacred Heart Church at 10 o’clock. Relatives and friends are kindly invited. Interment New Calvary Cemetery. In lieu of flowers, please consider donating to the American Lung Association, Sacred Heart Church, or Sherrill House, Jamaica Plain. For directions and guestbook gormleyfuneral.com.