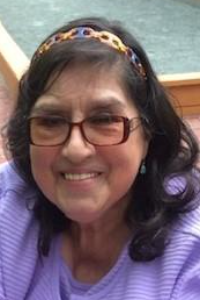 Lillian Emilia Perez Vela (Re’ut Leah) Katz took her last breath peacefully on August 6, 2022, while being treated for a chronic illness at the Massachusetts General Hospital in Boston, Massachusetts.

Lillian emigrated from her home in Lima, Peru to study nursing at St. John’s Mercy Medical Center in St. Louis (Creve Coeur), Missouri. Lillian learned English and was loved and highly respected by patients and colleagues alike. After graduating as a Registered Nurse, she married Lt. Arnold E. Katz at the Naval Aerospace Medical Institute in Pensacola, Florida and had the honor of pinning on his Flight Surgeon Wings.

Lillian was known throughout the community for the costumes, uniforms, and ballet outfits she created and the fact that she attended every skating show and hockey game at the Babson Skating Center as well as other sporting events and ballet recitals. She also enjoyed the time that she spent as the Camp Nurse at Tenacre Day Camp in Wellesley, MA.

After the Katz family relocated to New York, Lillian developed a deep love of the theater attending Broadway shows frequently with her family in New York City. Other favorite past-times included going to Radio City Music Hall to see the Rockettes and attending the Macy’s Thanksgiving Day parade as a family and staying at the Marriott Marquis Hotel in Times Square. Lillian enjoyed cooking and would host team dinners for her children, baking a 16-inch beautifully and carefully decorated chocolate chip cookie cake for dessert. Over 25-years later, family friends still talk about “Mrs. Katz’s famous cookie cakes.” Family was everything to her and she ensured that her children would have fond memories to last a lifetime.

Later in life, Lillian enjoyed playing bingo, art and she excelled at trivia. She impressed others with her intelligence. Lillian enjoyed going to the theater in Boston and to local restaurants for luncheon outings organized by the Katzman Family Center for Living. Lillian wasn’t afraid to try new things ordering interesting dishes like Mussels Diablo or Coconut Watercress soup. She was a colorful person who stood out and will be greatly missed. She was one of their most active participants and also enjoyed getting her hair and nails done. Lillian was witty, kind and always respectful and appreciative to the staff and others around her. It was a wonderful place for her to spend her final years.

“Grandma Lilly” received great joy from and is survived by her five grandchildren: Marissa Vela and Brandon Robert Keys of Beaverton, Oregon; Joshua Matthew, David Reece, and Sarah Isabelle Katz of Woodbury, New York. In addition to her children, John David (Deborah), Rachell Keys (Patrick), Jennifer (Amaral) and Jason (Anna) she is also survived by many beloved friends and relatives in her native Peru. She will be dearly missed by so many people. Lillian was predeceased by her mother, Raquel Vela Perez de Guerra, of Lima, Peru, in 2018, and her dear friend of 35+ years, Mary d’Amonville, of Wayland, MA, in 2020.

Relatives are invited to services at the Torf Funeral Chapel, 151 Washington Ave., Chelsea, MA on Monday, September 12, 2022 at 1:00pm. Donations may be made to the Katzman Family Center for Living, 17 Lafayette Ave, Chelsea, MA 02150.