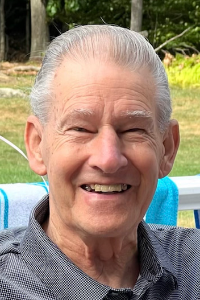 Lawrence E. Tucker, age 82, of Raynham, formerly of Brockton, passed away peacefully on Thursday, September 1, 2022, at his home surrounded by his loving family. He was the husband of Sandra M. (Goulet) Tucker. They were married for 56 years.

Born in Boston and raised in Mission Hill, he was the son of the late George L. and Alice G. (Andrews) Tucker.

He was a graduate of Boston Trade High School. Larry served proudly in the Massachusetts Army National Guard. He worked as a finish carpenter in southeastern Massachusetts and was the owner of LE Tucker Custom Remodeling.

An easy going, kind, humble person, and smart as a whip. He also was a great storyteller and had a great sense of humor. Lawrence enjoyed golfing at Pine Oaks, Pine Hill, Crosswind, and River Bend. He also loved oil painting and often gave his paintings to family members.

In addition to his wife Sandra, he leaves his children, Eric P. Tucker and his wife Adrienne of Raynham, Kimberly M. LaBrecque and her husband Jeffrey of Raynham, and Colleen M. Rosa of Brockton, his sister, Alice “Rainy” DeCoste, of Everett; seven grandchildren, Paul J. Tucker and his fiancé Jacqui Clark, Christopher M. Tucker, Paige A. Tucker, Cameron A. Siciliano, Tia S. LaBrecque, Colton M. Rosa, and Liliana B. Rosa; and two great grandchildren, Jayden A.C. Tucker and Killian N. Tucker. He was the brother of the late Thomas F. Tucker and Kathleen Mullineaux.

Relatives and friends are invited to visit with Lawrence’s family on Sunday, September 4, 2022, from 4:00 to 7:00 pm, in the Conley Funeral Home, 138 Belmont Street (Rte. 123) Brockton. His funeral service will be held on Monday, September 5, 2022, at 10:00 am, in the funeral home. A gathering for family and friends will be held at the conclusion of Larry’s service at a location to be announced. His interment will be private.