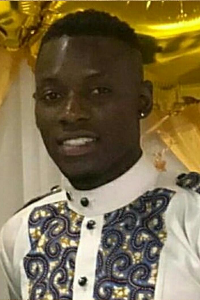 John K. Dumbuya, 28, of Lawrence, passed away suddenly and unexpectedly.
He was born on November 14, 1993 in Chambéry, France. He was a son of John A. Dumbuya of Westford, and Lise Isatu (Kamara) Dumbuya of Lawrence. He was born and grew up in France and relocated to Massachusetts in 2006. He graduated from Medford High School, and attended Middlesex Community College, then UMass Lowell.

John K. Dumbuya was kind-hearted individual with a passion for soccer and youth community outreach. He played for many competitive soccer teams, including Boston Bulldogs, Greater Lowell United, and La Roche Etoile Sportive Ornaysienne. In addition, he coached youth soccer throughout New England. Since 2019, He worked as a transitional coach with UTEC, an organization dedicated to helping justice-involved young adults reach social and economic success.

Besides his parents, he is survived by his siblings, Hawasatu Dumbuya of Lawrence, John AB Dumbuya of Holbrook, Annie Dumbuya and Lucy Dumbuya of Lowell. He is also survived by many nieces and nephews, and many friends.

His funeral service will take place in the funeral home at the conclusion of the visitation at 12:00 p.m., followed by procession to the Edson Cemetery.