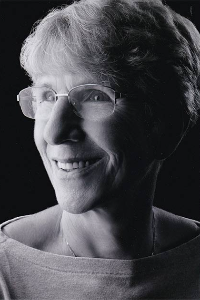 Carol June Gates Morschhauser of Mystic passed away August 27 at home, surrounded by her immediate family. Carol endured a brief but courageous battle with pancreatic cancer. She was born September 17, 1941 in Oswego, New York to Rev. Dr. Elbert E “Pearly” Gates, Jr. and June Davies Gates. Carol will be remembered as an independent woman who wasn’t afraid to tell you what she thought, but loved and cared for others unconditionally.

She grew up in Los Angeles, CA and Westfield NJ, but Carol always considered herself a native of Noank, CT, because of her connection to and regular visits to the Gates and Morgan family homes at the end of Chesbro Ave. Her experiences along the water and in Fisher’s Island Sound inspired a love of boating that accompanied her throughout her life.

Carol was a lifelong adventurer, the proverbial rolling stone that gathered no moss. As a child she traveled throughout the US, Canada and Mexico with her family. At the age of 18, Carol moved with her family to Hong Kong where her father headed Church World Service’s work with refugees. She graduated high school from Morrison Academy in Taiwan in 1961.

Returning to the US, Carol completed circumnavigation of the globe, and attended Alderson-Broaddus College in Philippi, WV. Carol had two children and eventually settled in Springfield, MO.

Carol moved to Mystic in 1980 and shortly thereafter met fellow adventurer and her husband for the next 40 years, Dave Morschhauser. She started working as a teller for New London Federal Savings & Loan (later Coastal Savings Bank) and eventually worked her way up to Branch Manager, until the bank was bought in the 1990’s. She also worked temporary jobs for a time – one of her favorite assignments was the Town of Groton Planning and Development Department. Carol later worked as Office Manager for Always Home (formerly MASH), until her retirement.

Carol loved traveling and cruising and did so as an adult at every available opportunity. She explored the US many times by car, boat, train, and RV and has visited all 50 states. Internationally, she returned to Hong Kong three times, traveled throughout China, Europe, and South America, and crossed the equator by ship. She has traveled as far North as Iceland and as far South as Antarctica. Her favorite city outside the US is Amsterdam.
Carol was also an artist and a musician. As an artist, she expressed herself mainly through quilting, needlepoint and stained glass. In addition to decorating her own home, many of her works were given as gifts or donated to and sold at bazaars and now adorn homes throughout the region.

Since childhood, Carol has played the piano for her own enjoyment, and accompanied the family singing hymns at home on holiday occasions. She was also an accomplished hand bell ringer for over 40 years. Frequently playing four-in-hand, she performed in church choirs, at regional festivals, with the Shoreline Ringers, and even once at Carnegie Hall as part of a massed choir.

Following her retirement, Carol became an avid walker, eventually working up to a 4 mile walk every day. Over the years, she became well known in her community. She always had a captivating story to tell and a knack for being interested in everybody. She was an active member of Union Baptist Church in Mystic, and served on many boards and committees. Most recently she sang alto in the chancel choir.

Carol is survived by her husband, a daughter Tammy (Steve) Childers of Springfield, MO, a son Jamie (Laura) Hurd who is currently touring the world by tandem bicycle, and two grandchildren, Katie Hurd of Fort Wayne, IN and Andrew Hurd of New York, NY. She was predeceased by her parents, a brother Elbert “Ted” Gates, III, a sister Constance “Connie” Gates and her daughter-in-law, Diane Hurd.

A memorial service will be held to celebrate Carol’s life at 11:00am on September 17, 2022, at Union Baptist Church, 119 High Street, Mystic. Interment in Noank Cemetery will be conducted privately at a later date.
In lieu of Flowers, the family requests that donations be made in Carol’s name either to Always Home (https://www.alwayshome.org/) 119 High Street Mystic, CT 06355, or to the Shoreline Ringers (https://shorelineringers.org/) 18 Robin Hood Drive, Gales Ferry, CT 06335.

The family would like to thank the Lawrence and Memorial Hospital staff in unit 6.2 and the Beacon Hospice staff for their compassionate and loving care.