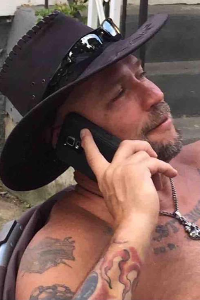 Scott was born on August 25, 1959, to two loving parents, Eleanor (Lunny) Young and Harry Young, in New Bedford, Massachusetts. He was the fourth of seven children.

Scott spent his younger years in Fairhaven, Massachusetts, where he grew to be an outstanding athlete, and is now a member of the Hall of Fame at Fairhaven High School. He excelled in both track and football, later earning himself a scholarship to play football in college at UNH.

Football was not the only sportsmanship Scott was fond of, he also thoroughly enjoyed hunting. He had an expanded knowledge of the hunting world and it brought him much happiness. He loved the outdoors.

Scott spent all of his working years as an Iron Worker, mostly in Boston for the Iron Workers Local 7. He eventually went on to continue his work in New York after 9/11, and he worked on many of the sky scrapers and major tunnels you see in these cities.

After a long and courageous three-year battle with esophageal cancer, Scott leaves behind his three children, Ryan Young and his wife Amy, Kristin Young, and Quinn Young, his three grandchildren, Korrine Harbour, Patrick Young, and Faye Fernandez, his loving girlfriend, Susan Boyer, and her two daughters, Emily and Samantha Boyer, his brothers, sisters, many nieces and nephews, and so many friends, all of which he loved so much. He is predeceased by his parents.

Nothing meant more to him than his family. To say that he will be missed would be an understatement. Gone too soon, but in our hearts forever.

In lieu of flowers, the family asks that memorial donations in Scott’s name be to the Dana-Farber Cancer Institute, PO Box 849168, Boston, MA, 02284.