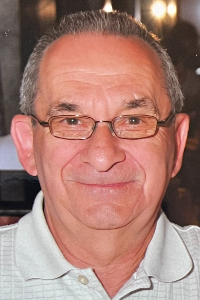 Joseph F. Ardizzoni, Sr., aged 79, of Tewksbury formerly on Stoneham, Woburn and Medford, passed away in the company of his beloved family at the Lahey Clinic Medical Center, on Monday, August 29, 2022. He was the beloved husband for 56 years of Josephine (Romano) Ardizzoni. Born and raised in Medford, Joseph was the son of the late Frederick and Carmella M. (Fazio) Ardizzoni.


Following his graduation from the Medford Vocational Technical High School, Joe proudly served in the United States Army during the Vietnam Era. After completion of his military service he returned home to Medford, was married and began a long career as a tractor trailer driver. He began his driving career with H.P. Hood Milk Co. and later with Overnight Trans for many years until he retired. Joseph was extremely proud of his impeccable driving record throughout his long dedicated career. After his retirement he worked for many years as a loyal and dependable funeral assistant and driver with the Dello Russo Family Funeral Homes where he greeted many families with great care and dignity.


Joe will fondly be remembered as a devoted husband, loving father and adoring grandfather. He worked extremely hard to be a great provider for his family and was most proud of his family especially his son and grandchildren and all their many accomplishments that he loved to talk about with friends and colleagues. Joe cherished his family and was happiest when he was surrounded by those he loved. He enjoyed time with his wife Josephine and taking walks together at Gloucester Harbor. He loved to joke and share stories, especially during family gatherings and at the dinner table with his family and friends. He will be greatly missed.


In addition to his beloved wife Josephine, He is survived by his devoted son Joseph F. Ardizzoni, Jr. and his wife Michelle of Wilmington. He was the loving papa of Anna and Domenic Ardizzoni. Cherished brother of Maryann Miller and her husband Ron, of Ft. Myers, FL. Brother-in-law of Peter Romano of Salem, Annette Hunt of Medford, Michael Romano of Florida and the late Frances Dixon. Uncle of Donna of Florida, the late Cheryl and Patrice and is further survived by many more nieces and nephews.


Relatives and friends are respectfully invited to visit at the Dello Russo Family Funeral Home, 306 Main St., MEDFORD, Saturday, September 3rd, from 9 to 11 AM followed by a funeral Mass celebrated in St. Clement Church, 71 Warner Street, Medford, at 11:30 AM. Services will conclude with Military Honors and burial at Oak Grove Cemetery, Medford.