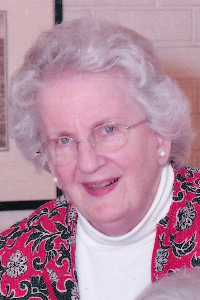 CHARLTON – Margaret Bourne Pedersen, 91, formerly of Dudley, died Monday, August 29, 2022 at Overlook Masonic Healthcare with family at her side. She was the daughter of the late Margaret (Watson) Bourne and Edward Walter Bourne of New York City and North Cornwall, CT and was a direct descendant of Richard Bourne of Sandwich, MA and of Roger Williams of Providence, RI.

Mrs. Pedersen was born on March 8, 1931 in New York City and graduated from the Brearley school there and then from Mount Holyoke College in South Hadley, MA. Following graduation, she lived in W. Hartford and then Farmington, working in the Group Insurance Department of what was the Connecticut General Life Insurance Company. In 1972, she began working in various capacities at the former Paul Revere Life Insurance Company in Worcester, retiring in 1993 as a consultant in the human resources department. She lived in Dudley for many years before moving to Overlook in 2009. She also summered and then visited the family home in North Cornwall, CT for over 50 years.

In Connecticut Mrs. Pedersen belonged to the League of Women Voters in Farmington and Avon, the Hartford Mount Holyoke Alumnae Club, and the Memorial Methodist Church in Unionville. On moving to Massachusetts, she belonged to the American Association of University Women, the Black Tavern Historical Society of Dudley, the Nichols College Women’s Club, L’Apres-Midi Club and the First Congregational Church, Conant Memorial, of Dudley.

She is survived by 2 sons, Andrew Russell Pedersen and his wife Isabel of Rancho Cucamonga, CA and Gregory A. Pedersen and his wife Janine of Mount Airy, MD; 3 granddaughters and 4 grandsons; her twin sister, Susan Bourne Brinkama of Laverne, CA; a brother, James Bourne and his wife Gale of Aptos, CA; and several nieces and nephews. She was preceded in death by a sister Jane Thomson Bourne in 1989 and by a brother Edward Gaylord Bourne in 2013.

A service will be held at 10:00 AM on Thursday, September 8, in the First Congregational Church of Dudley Conant Memorial, 135 Center Road, Dudley with Pastor John R. White officiating. Private burial will be in the family plot in North Cornwall Cemetery, N. Cornwall, CT. There are no calling hours. The family requests that flowers be omitted and instead donations be made to either the Black Tavern Historical Society of Dudley, PO Box 143, or to the Dudley Conservation Land Trust, PO Box 14, both in Dudley, MA 01571. Arrangements are under the direction of Sitkowski, Malboeuf & Hickey Funeral Home, 340 School Street, Webster.