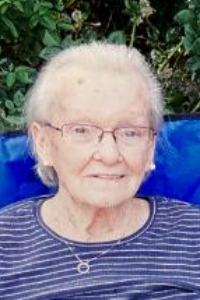 Joan E. (Cotter) Donovan, a lifelong resident of Charlestown, entered into eternal life on Wednesday, August 31, 2022 at the Woburn Rehabilitation and Nursing Center. She was 93 years of age.

Joan was born in Boston on March 11, 1929, a daughter of the late James Cotter and Elizabeth (Meehan) Cotter. She grew up in Charlestown where she was educated in the Boston Public School system. Joan worked as a telephone operator for the telephone company for over 40 years. She enjoyed playing Bingo, summering at Hampton Beach, and traveling to Florida with her family.

Joan is the beloved wife of the late Thomas E. Donovan Jr. She is the devoted mother of Thomas J. Donovan and his wife Kim, Joanne Todd and her husband Gene, Richard J. Donovan, Brian S. Donovan and his wife Maureen, and Elaine Green and her husband Mike. She is the adoring Nana of Thomas, Jillian, Katlin, Rebecca, Kelly, Michael, Paige, Brian, Eric, Michael, Elizabeth, Colleen, Christopher, and her great-grandchildren Malachy, Michael, Madison, Jameson, Thomas, William, and Rian. She is the loving sister of the late Bill Cotter and Betty Locke. She is also surved by several loving nieces and nephews.