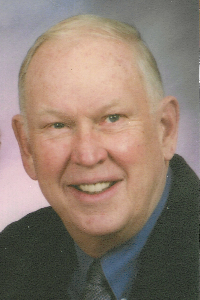 Robert “Bert” C. Olson passed away peacefully surrounded by his loving family on August 28, 2022. Bert was a resident of North Attleboro living with his son Glenn and his wife Cyndi at the time of his passing. Bert was born and raised in Braintree. He was the second of four sons of Albert and Elsie Olson: Richard, Robert, Roger, and John. He attended Braintree High School where he played baseball and basketball and captained the baseball team the same year he graduated in 1949. He had a tryout with the Boston Braves.

Robert lived in South Weymouth for forty-eight years before moving to Hull in 2008 and then to Franklin in 2016. He worked at Capitol Offset Company in Concord, New Hampshire for two years and then got into the International Photo Engravers Union and worked as a foreman at the Franklin Engraving Company in Boston for twenty years. From there he went to work at the Christian Science Monitor becoming the superintendent of the engraving department where he worked for twenty-five years. He finished his working career at the Boston Globe and retired at sixty-five years old. Bert enjoyed spending time with family and friends as well as traveling. He also enjoyed many hobbies including golf, candlepin bowling, and skiing. He was also an avid Boston sports fan. Bert also had a special place in his heart for the family dog, Otto.

Husband of late wife Lucille (Christie) who was the daughter of Earl and Madeline Christie of Weymouth. Father of three sons, Glenn and his wife Cyndi of North Attleboro, Donald and his wife Meredith of Woburn and Doug and his partner Patricia Keefe of Weymouth. Robert had five grandchildren: Sarah, Michael, Charlie, Sofia and Matthew and three great grandchildren with Sarah and her husband T.J. Rizzo: Emma, Joey, and Gabby.

Friends and relatives are respectfully invited to attend visiting hours for Bert on Saturday
October 8, 2022 at C.C. Shepherd Funeral Home, 134 Pleasant St. (Columbian Sq.) from 10 to 11:30 a.m.
A funeral service will be held at the Old South Union Church following the visitation at noon. In lieu of flowers, donations may be made to Old South Union Church, located at 25 Columbian St. South Weymouth, MA 02190.