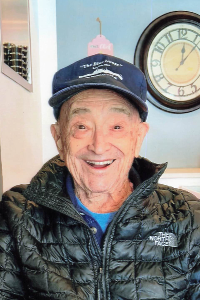 Thomas A. Storella, aged 95, passed away peacefully in the company of family at the Lahey Clinic on Wednesday, August 24th. Born and raised in East Boston, Thomas was the son of the late Alfonso and Tommasina (DeLuca) Storella. After graduating High School, Thomas enlisted in the US Navy and served in World War II and served upon the USS Honolulu and the USS South Dakota. After his honorable discharge he returned to East Boston and later settled in Medford where he raised his family and lived for many years. Thomas worked as a carpenter throughout his life. He was part of the team of tradesmen and artisans who help build and maintain the properties of the Polaroid Corporation. After his retirement he and his beloved wife Mary traveled around a bit. They enjoyed the warm desert air of Arizona and Nevada for several years before returning closer to home to be with their family. A very devout and traditional catholic, Thomas enjoyed cooking for family and friends. While living in the vicinity of Las Vegas, he also enjoyed the opportunity to try his luck every now and again, and especially developed the taste for Pai Gow Poker. He was truly devoted to his faith, friends, and family, but especially loved staying connected with his grandchildren.

The beloved husband of Mary “Bootie” (Hoar) Storella with whom he shared 73 years of marriage, Thomas was a devoted father to Thomas A. Storella, Jr. and his wife Donna of Milton, and William Storella and his wife Susan of Stoneham. He was a loving grandfather to Jill, Suzanne, Kate, William, Jr., Paul and Terry. Thomas was a loving great-grandfather to 10 great-grandchildren, and a dear brother to Robert Storella of Philadelphia and the late Dr. John Storella. He also leaves many nieces and nephews.

Relatives and friends are respectfully invited to visit with the family at the Dello Russo Funeral Home, 306 Main St., Medford Thursday, September 1st from 4 – 8 PM. A Requiem Mass will be offered in the funeral home on Friday at 10 AM followed by burial and military honors at Oak Grove Cemetery, Medford.

In lieu of flowers, contributions may be made in Thomas' name to Our Lady of Victory Church, 1575 East Windmill Lane, Las Vegas, NV, 89123.