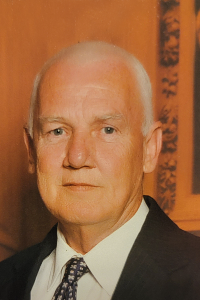 James E. “Buzzy” Burke, age 75, of Brockton, died peacefully, August 29, 2022 at his home. Buzzy was the loving husband for 54 years of Marie (Stevens) Burke. Born in Boston, he was the son of the late Francis T. and Anna M. (Brennan) Burke. Buzzy was raised and educated in Charlestown and Dorchester. For 32 years, he was employed by Nickerson Machinery in Norwell and Hingham and retired in 2008. He was a devoted father and grandfather and avid Boston sports fan.

In addition to his wife Marie, he is survived by his sons James E. Burke Jr. and his wife Mary of West Bridgewater, David M. Burke, Sr. and his wife Kristine of East Taunton, and TJ and David Roy of Worcester. He was the best Dub/Bampy/Papa to Patrick J. Burke, Meghan (Xavier) Fernandez, David M. Burke Jr., Joseph Roy, Andrew Roy, and Michael Roy. He was the great grandfather of Xander Daniel Fernandez and Elliana Rose Fernandez. He was the brother of Virginia and the late Donald Mason of Abington, Jean and the late Robert Hill of Upland, CA, Frances and Joseph Leary of Middleboro, Richard T. and Karen Burke of Hanover and the late Arlene and Frank O’Toole. He was the brother-in-law of Katherine Bethoney of Norwood, Lynda and Joseph Rosenfield of Middleboro, Irvan A. Stevens III of Brockton, Peter Stevens of Easton, Thomas and Elaine Stevens of Norton, Susan and Michael Stone of Lynn, and Charles Stevens of Brockton, and Julie Stevens of Taunton. He was also survived by many nieces and nephews who all loved Uncle Buzzy. He was a friend to all and loved by many.

Visiting Hours will be held in the Conley Funeral Home, 138 Belmont Street (Rte 123) Brockton, Thursday, September 1, from 4-7pm. The funeral procession will gather at the funeral home Friday at 9:30am for a funeral mass in Our Lady of Lourdes Church at 10:30am. Burial will follow in Pine Hill Cemetery, West Bridgewater.