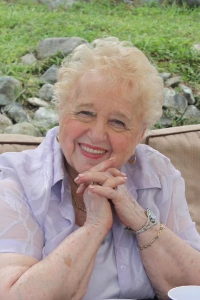 Alice (Lattanzio) Spadafora passed away on August 24, 2022 just shy of her 96th birthday.

Born in Everett, Alice met Anthony “Tony” Spadafora Sr. in 1942 and they married in 1945. Alice and Tony were lifelong residents of Malden’s Edgeworth neighborhood where they raised their family. They shared 64 years of marriage before Tony’s passing in 2010. Since then, Alice has remained in the family home in Edgeworth surrounded by family until her passing this week.

Alice will always be known as a strong, loving matriarch of the Spadafora family. She supported her husband Tony throughout his entire career while raising their four sons.

The family grew and Alice had a new role, Nana. She doted on her grandchildren who have fond memories of Nana Alice at the family restaurant, Anthony’s of Malden, at her house in Edgeworth and many summers at their house on Cape Cod. One of the many memories the family will cherish is the annual St. Jude picnic where the Spadafora Family would always come together to raise money for the City of St. Jude. Alice was a big part of this effort selling “scratchies” to help the cause and would always buy a bunch herself to sneak to her grandchildren.

The family continued to grow and Alice became a great-grandmother and just before her passing, a great-great-grandmother. Alice loved going to the casino to play slot machines and watching the Red Sox, win or lose. She was well loved and loved fiercely and will be missed by all who knew her.

A Mass of Christian Burial celebrating Alice's life will be held at Saint Mary's Church, Herbert Street, Melrose on Friday October 21st, 2022 at 11:30am. Relatives and friends are respectfully invited to attend.