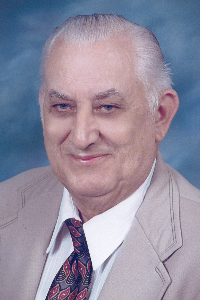 Funeral services will be held 2 PM, Monday, August 29, 2022, at The Paulk Funeral Home Chapel, in Fitzgerald, Georgia, with the Rev. Chris Ramsey officiating. Entombment will follow in Evergreen Cemetery, Fitzgerald. Pallbearers will be his grandsons and great-grandsons. The family will receive friends from 6-8 Sunday evening at the funeral home in Fitzgerald.

Mr. Vaughn was born October 27, 1932, in Osierfield, Georgia, to the late Troy M., Sr. & Mamie McDaniel Vaughn. He was a 1951 graduate of Ocilla High School. Mr. Vaughn served his country honorably in the United States Army during the Korean War. He had a lifelong career with the railroad beginning with Seaboard Coast Line and retiring as a conductor with CSX after 42 years of service. An avid gardener, he loved working in his yard and could be found most days pruning and tending his beautiful roses. He was a member of Central United Methodist Church where he served as chairman of the ushers for many years.