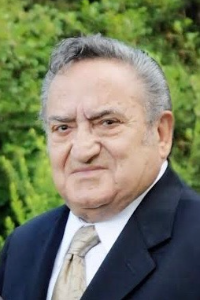 
Carmelo Pintone, of Woburn formerly of Medford and Boston's North End, passed away peacefully surrounded by his family, August 24, 2022. He was the beloved husband of the late Benita (Tammaro) Pintone and together they shared 61 years of marriage. Carmelo was born in Marina Di Giosia Ionica, Reggio Calabria, Italy. He was the son of the late Giovanni and Teresa (Candida) Pintone.

Carmelo came to the United States at the age of 24 and settled in the North End of Boston. He was married in 1958 to his beloved Benita in a ceremony held at St. Mary Church in the North End. Following their marriage the young couple moved to Somerville and then Medford where they would raise their family. Carmelo worked for over forty years as a master tailor with some of Boston’s high end retail stores including Barney’s New York and Giblees Menswear. He was a devoted husband and father. He loved enjoying meals with family and friends. Nothing made him happier than to be surrounded by his children, grandchildren, and those he loved. Carmelo was life member of the Madonna Delle Grazie Society and was most proud to be a citizen of the United States.

Funeral from the Dello Russo Family Funeral Home, 306 Main St., MEDFORD, Tuesday, August 30th, at 8:30 a.m. followed by a funeral Mass celebrated in St. Raphael Church, 512 High St., Medford, at 9:30 a.m. Relatives and friends are respectfully invited to attend. Visiting hours Monday from 4 to 8 p.m. Services will conclude with burial at Oak Grove Cemetery, Medford. It has been requested that in lieu of flowers contributions may be made in Carmelo’s memory to the Boston Children's Hospital Trust, 401 Park Drive, Suite 602, Boston, MA 02215.