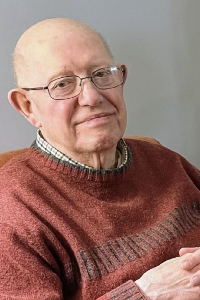 Robert H. Begin of Milton, formerly of Canton and Easton passed away August 24th at Marian Manor. Born in Danvers, he graduated from East Boston High School and was a proud Army Veteran of the Korean War. He worked for many years at GTE Sylvania in Needham before retiring. After retirement he worked for a short time for Cove in Canton and for many years as a funeral assistant at the Dockray & Thomas Funeral Home. Bob enjoyed photography, music, history and traveling to new places to experience new culture food and wine. His greatest joy and accomplishment in his life was his beloved family. Bob told his family that his wife Noreen wore the map of Ireland on her beautiful face after their first date.
Beloved husband of Noreen M. (Jackson). Father of Julie Wiggin and her husband Brad of North Hampton, NH, Meg Bean and her husband Steve of Lakeville, Lori Fernald and her husband Jeffrey of Newbury, and Robert H. Begin Jr. and his wife Kelley of Swampscott. Proud grandfather of Machaela and Miriam Wiggin, Bryan and Caitlyn Bean, Maggie and James Fernald, and Maeve, Ryan, and Owen Begin. Brother of Jeanne Chartier and Paulette Harper both of FL. Visiting hours at the Dockray & Thomas Funeral Home 455 Washington St. Canton Sunday from 4:00 to 7:00 pm. Funeral Mass at St. Oscar Romero Parish, Canton Monday at 12:00 noon. Burial St. Mary’s Cemetery, Canton. Army Veteran of the Korean war. Donations may be made in his memory to Marian Manor 130 Dorchester St. S. Boston, MA 02127.