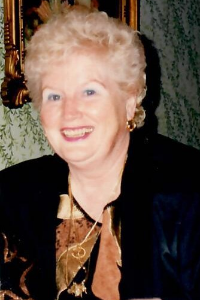 Shirley W. Ring (Peterson) passed away on August 21, 2022. She was 88 years old. Shirley was the beloved wife of the late Edward Ring. Born in Somerville, she was the cherished daughter of the late Carl F. and Henrietta (Meyer) Peterson.

Prior to her retirement, Shirley worked as a server in the restaurant industry.

Shirley was the devoted mother of Stephen Savarese and his wife Deborah of Revere, Karen Benson and her late husband Michael of Saugus, and stepmother of Richard Ring and his wife Ellen Brennan Ring. She was the adored grandmother of Amanda Savarese, Patrick Pisano, Paige Benson and Alison Brennan Ring and family. Shirley was the dear sister of Alan Peterson of MA, Linda Jordan of San Diego, CA, Elsie Russo of Las Vegas, NV, and the late Carl Peterson, Norman Peterson, Thelma Shallah and Pauline Peterson.

A funeral service will be held in the Woodlawn Cemetery Chapel 302 Elm St. Everett on Tuesday, August 30, at 10AM. Please go directly to the chapel. Interment will follow in Woodlawn Cemetery. In lieu of flowers, donations can be made to St. Jude Children’s Research Hospital 501 St. Jude Place Memphis, TN. 38105.