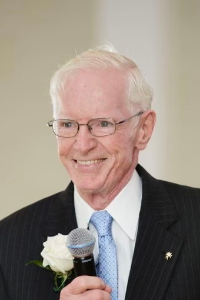 Bill met his loving wife Clare Lyons in 1948. They married in 1955 and celebrated their 67th anniversary this past April.

After tending bar in South Boston during the 1950’s, Bill began his career in the insurance industry with John Hancock in 1961, then with Allstate in 1963. In 1988, he founded Flanagan Insurance Agency, Inc. in Lexington, MA. Bill was also a proud co-founder of the allMass Group, a local network of insurance agencies.

A proud member of the Knights of Columbus and St. Joseph’s Church in Needham, Bill’s life was one of faith and service. He was a talented poet, raconteur, and had a joke for any occasion.

A Funeral Mass will be held on Saturday, August 27, 2022 at 10:00 AM at St. Joseph’s Church in Needham. Visiting hours are from 4-7pm on Friday, August 26, at the George F. Doherty & Sons Funeral Home, 1305 Highland Ave, Needham, MA. Relatives and friends kindly invited. Interment in St. Mary’s Cemetery, Needham.

In lieu of flowers, donations can be made to Cultivate Care Farms, in memory of his grandson Jake Rogers, https://www.cultivatefarms.org/take-action