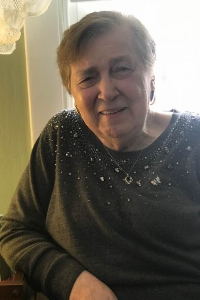 Irene Derosier, 87, of Plainfield Pike, Scituate, died Saturday, August 20, 2022 at her home. She was the widow of Gregory J. Derosier who died in October, 2016. They had been married for 61 years at the time of his death.

Born in Limestone, Maine, she was a daughter of the late Edmund and Laura (Bourogine) Albert. She had lived in Scituate for the past 55 years.

Irene had worked as a waitress and manager, a bank teller and a cashier at Foxwoods.

She is survived by her four children, Cheryl A. Verdelotti and her late husband, Richard of Scituate, Gregory P. Derosier and his wife, Mary Ellen of Scituate, Laura M. Gentile and her husband, Paul of Martinez, California and Lisa R. Saccoccio and her husband, Sal of Coventry, her grandchildren: Jennifer, Thomas and his wife, Amanda, Daniel, Nicole and her husband, Adam and Hillary, her great-grandchildren, Marissa and Madison,Autumn, and Luna. Her siblings: Ralph and Ruben Albert, Leona Valdes, Pauline Digile, Rita Gendolfe, Ruth Sides and Nan Bassett. She was the sister of the late Herbert, Edmund, Freeman, Kenneth, Gary and Arlene Albert.

A Mass of Christian Burial will be held Saturday at 10am in St. Joseph Church, Danielson Pike, Scituate. Visitation Friday from 4-7pm in the Anderson-Winfield Funeral Home, Route 44 at Greenville Common, Greenville, RI Burial will be private. In lieu of flowers, donations may be made to Hope Hospice Care Center, 1085 North Main St. Providence RI,02904