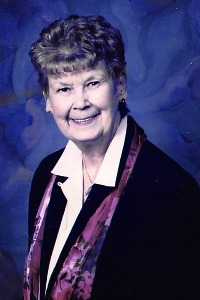 Jean C. (Lauriat) McInerney, 84, a longtime Lowell resident, passed away on Friday, August 19, 2022 upon her recent relocation to the Saab Residence in Lowell. She was the widow of the late Francis J. “Mac” McInerney who passed away in 2006.

Jean was born in Boston on September 10, 1937. She was raised and educated in Melrose and graduated from Melrose High School with the Class of 1955. Shortly after high school, she married the love of her life, Francis J. “Mac” McInerney and started their family.

In addition to her family, Jean also worked several jobs over the years. Her first job was with John Hancock as a key punch operator and data entry, which she did for around 5 years. She later moved on to Commodore Foods, Educator Biscuit, Worthen Industries and Ashland Chemical. She eventually retired in 2002.

She also volunteered at the Hunt Retirement Community in Nashua for a number of years and with the Lions Club, reading to the blind. She also enjoyed dancing, swimming, traveling when she could. She was an avid Boston sports fan, especially of the Boston Red Sox. She loved to shop and always had a soft spot for Kohl’s in particular. Her legacy though, is her family, raising her 5 children was what brought Jean the most pride.

She is survived by her 5 children, Mary Christine McInerney-Japy and her husband, Philippe, of Windham, NH, Kathleen M. Curotto and her husband, Emanuele, of Dresher, PA, Jeanne Broderick and her husband, James, of Newbury, Annemarie McInerney and her fiance, Scott Sheehan, of Atkinson, NH and Timothy McInerney and his wife, Jodie, of Grafton. She is also survived by her 10 grandchildren, Kerry Gonzalez and her husband, Ramon, of Lawrence, James Bartlett of Atkinson, NH, James and Caitlin Broderick of Newbury, Nicolas and Christopher Curotto of Dresher, PA, Erin Japy of Windham, NH and Connor, Elijah and Benjamin McInerney all of Grafton. Her Brother, Philip Lauriat and his wife, Mary, of Wakefield, her sisters in law, Leslie Carroll of Tuftonboro, NH and Jacqueline Lauriat of Shelton, CT and several nieces, nephews and friends.

She was also a sister of the late Thornton "Hank" Lauriat.

On Wednesday, August 24 all are welcome to attend her calling hours from 4 p.m. until 7 p.m. at the McDonough Funeral Home, 14 Highland Street, Lowell, MA 978-458-6816. Her funeral will be held on Thursday, August 25 at 11 a.m. at St. Mary Cemetery. Plese arrive at the funeral home at 10 a.m. to join the procession or meet us directly at the cemetery.

Donations in her memory may be made to the Saab Residence Activity Fund, 1085 Varnum Ave, Lowell, MA., or to the charity of one's choice.

Please find us on Facebook or use the form on our website to leave the family a message of condolence.