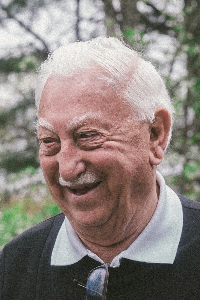 Albino G. Carlucci 85, of Franklin, passed away peacefully surrounded by his family on Saturday August 20, 2022, at Milford Regional Medical Center, following an illness. He was the beloved husband of Elizabeth “Betty” (Narducci) Carlucci, with whom he shared 64 years of marriage.

Born July 20, 1937, in Santa Maria del Molise, Italy, son of the late Nicola and Giovannina Carlucci, he came to the United States and settled in Franklin in 1946.

He was educated in Franklin and was the owner of C&A masonry established in 1958 retired in 1993.

Albino was very dedicated to his wife, family and friends he also enjoyed spending time in his garden and his wine cellar.

He was predeceased by his brother Anthony “Tony” Carlucci & sister Maria Ruscitti.

Relatives and friends are invited to attend his funeral Wednesday August 24th at 9AM from the Charles F. Oteri and Son Franklin Funeral Home 33 Cottage St. followed by a funeral Mass in St. Mary’s Church, Franklin at 10AM.

Calling hours are Tuesday from 4-8PM.