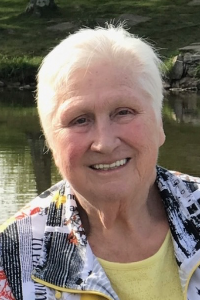 Arlene E. (Robertson) Johnson, 83 of Franklin, died in the comforts of her home with family by her side on August 15th, 2022, after a brief battle with cancer.

Arlene was born in Boston to Robert and Lillian Robertson on August 27, 1938. She lived in Dorchester during her early childhood, until her family moved to Woburn.

Arlene graduated from St. Charles Catholic School of Woburn in 1956. She retained close friendships with many of her classmates until her passing. After graduation, Arlene continued her education at Catherine Laboure School of Nursing, and graduated with her RN in 1959.

Arlene started her nursing career at Mass General and worked there until getting married. She traveled to California and Nebraska with her husband while he was enlisted in the Air Force, and worked at several area hospitals while they were stationed there. After his discharge in 1967, she and her husband moved to Franklin, where she continued her 41 year nursing career at Pondville Hospital and later Southwood Hospital. She retired in 2000.

Arlene was passionate about her nursing career. She took pride in her work while providing comfort to those who needed it, and would stand up for patients who needed their voice heard. She gladly stepped in to help family and friends when they needed caring for outside of her work.

Arlene thoroughly enjoyed her adventures with her late husband. It didn’t always have to be an extended vacation. They loved taking off for a drive in the morning, going to a familiar destination, or finding a new place to explore. Her favorite part of these journeys was finding new restaurants to review.

She enjoyed gardening, reading, jigsaw puzzles, her New England Patriots, and playing the slot machines at the local casinos. Arlene also loved to host holiday gatherings for friends and family, and enjoyed cooking for days before hand in preparation.

Arlene was the beloved wife of the late Leroy A. Johnson. They were 17 days away from celebrating their 58th wedding anniversary when the love of her life passed in 2021. She was the proud mother of Jill Johnson of Franklin, Jan Wasnewsky and her husband Vin of Franklin, Eric Johnson and his wife Karen of Falls Church, VA. She was predeceased by her sons Dale and Kenneth. She was the mother-in-law of Sharon Pellegrino of Billerica.

Arlene was the proud and loving Nana to grandchildren Laura, Elisabeth, Daniel, Davis and Paige. She enjoyed creating a special bond that was unique to each of them.

She was predeceased by her brother, Robert “Bobby” Robertson of Woburn. She leaves behind her sister Carole McQueeney, cousins, many nieces and nephews.

Services will be held privately by the family.

Memorial donations can be made in her honor to the Franklin Food Pantry, 43 West Central St, Franklin Ma 02038.