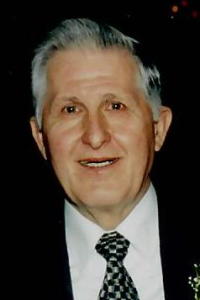 SPENCER: Edward F. Kresco,87, of Spencer, died peacefully, Monday, Aug. 15th. at his home. He leaves his wife of 63 years, Dolores H. (Lysik) Kresco, his daughters; Debra L. Fahey and her husband Joseph of Beverly, Sharon M. Acuna of Paxton, Lisa A. Churchey and her husband Robert and Laura J. D'Amato all of Spencer, his brothers; Donald W. Kresco of Montana, Robert P. Kresco and his wife Claire of E.Brookfield and Alfred S. Kresco and his wife Mary of No.Brookfield, his sisters; Sylvia B. Lemerise of Hubbarston and Doris Woods of Spencer, 6 grandchildren; Misty, Michael, Amanda, Jennifer, Caitlyn and Sienna, 7 great grandchildren, many nieces and nephews.
He was born in Southbridge, the son of Edward P. and Blanche E. (Cloutier) Kresco. He served in the U.S. Air Force.
Ed worked at Millbrook Distributors in Leicester before retiring in 1997. He previously was a wire drawer at the former Worcester Wire Co. for many years. He was a car enthusiast.
Private funeral services and burial in Worcester County Memorial Park, Paxton will be held at the convenience of the family. The J.HENRI MORIN & SON FUNERAL HOME, 23 Maple Terr., Spencer is directing arrangements for the family. In lieu of flowers, contributions may be made to Second Chance Animal Services, P. O. Box 136, E.Brookfield, MA 01515.