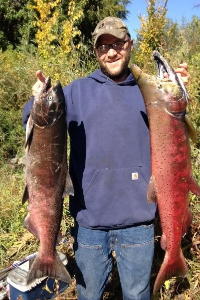 
Steven Christopher Collins, age 40 of Prosser, entered into rest on August 9, 2022 in Kennewick, WA. He was born on April 3,1982 to Robert and Patricia Collins. Steve was raised and educated in Prosser, graduating from Prosser High School. Steve continued to be a lifelong resident of Prosser where he continued his love for the outdoors while working on the farm.

Steven was a devoted son, brother, uncle and friend. He enjoyed the outdoors, hunting, fishing, camping and being surrounded by his family and friends. He was always scouting out the next hunting or fishing spot that would for sure land him the big one and always had a great story when he returned. Steven had the most kind and generous heart. He would give his last dollar to anyone in need and always made sure that others were taken care of before himself. He will be deeply missed by his family, friends, and all who knew him.

The funeral service is scheduled for Tuesday August 16, 2022, at the Prosser Funeral Home followed by burial at the Prosser Cemetery and celebration of life at his grandmother's house.