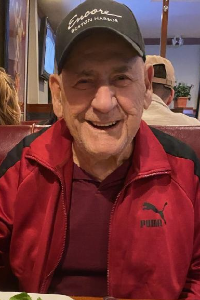 John A. Gangi, age 87, of Woburn and formerly of Winchester, MA died fighting on August 13, 2022, surrounded by his family. He was the beloved husband of the late Rosemarie (Oppiddo) Gangi.

Born and raised in Winchester, John was the fifth of six children. With 3 older brothers, 1 older and 1 younger sister, he was the baby brother. He was known as the one to get into mischief but learned young what it was like to work hard and balance the time to enjoy family and friends. These were some of John’s strongest characteristics that he passed on to his 6 children.

John enjoyed making people laugh, always laughing harder with them. He had many friends, from his childhood Winchester buddies, to the ones he met and enjoyed time with throughout his life, although his family was most important to him. No matter where he went, or who he went with, he would be whistling in anticipation to enjoy what adventure waited. John retired early as a painter and laborer from MIT and was fortunate enough to enjoy this time with his beloved wife Rosemarie until her death in 2004. Those times would be spent taking wonderful trips to the casinos. Johnny enjoyed playing the slots, KENO and a good card game. When not in Winchester, you could find John at his second home in Mashpee. He often went from window to window anticipating the arrival of his friends, and the carloads of his children and grandchildren pulling up to create the great memories they all continue to share today.
To say John enjoyed music would be an understatement. He loved the oldies and would belt into song, reaching for his harmonica to play along - something he did to the very end!
John built a strong home with a solid foundation for his family with an open door for all to enter, never turning anyone away that needed a place. He would just add another room. He never complained even if challenges arose. When asked how it was going, he would always answer, “Good, good!” with a smile. Words alone could not describe the loving, passionate and caring person Johnny was. He will be greatly missed by all and leaves an irreplaceable void in his family. We know that he is singing with the angels.

John is lovingly survived by his children: Lisa Hennelly (Tim) of Haverhill, Veronica Drougas of North Reading, Christine McLean (David) of Woburn, Jeffrey Gangi (Meaghan) of Woburn, Jonathan Gangi (Candice) of Methuen. A son, Andrew Gangi, predeceased him. He was also the cherished “Pup” to 12 grandchildren: Andrew and Danielle Gangi, Shauna and Michael Hennelly, Nico and Yanni Drougas, Thomas and Molly McLean, Arianna, Alexandria, Jake and James Gangi, and the great-grandfather of Dominick, TayaLynne, Grayson, Derek and the late Raehannah. He was also the dear brother of Josephine Buccierre and the late Paul “Charlie”, James and Frank Gangi and Mary Vanyo.