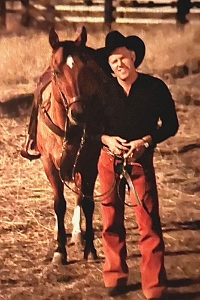 On Wednesday evening, August 3rd, Dean Clark ended his battle with Parkinson’s Disease at his home in Prosser, WA with his loving wife of 32 years, Sara Sue, by his side.

David Dean Clark, Sr. was born May 29, 1944 to David Danford and Hilda Virginia Clark. He was the oldest of their three children. Sister Donna (Holland) and brother Rick Clark followed.

Dean grew up on the Satus and experienced a childhood filled with hunting, riding horses and running around with his buddies “The Satus Boys”.

He attended Granger schools from the second grade onward, and graduated with the class of 1962. Dean was a star athlete in track, basketball and football. He was very well liked by his peers and much respected by his teachers. This is something Dean would carry with him for the rest of his life. He was loved by so many and anyone who met him did not forget him or his beautiful smile, humility, or radiating kindness.

Dean began working jobs for Satus Store, Grandview Meat Packing, and then worked for a traveling company in the telephone industry called North Electric. This led him to what was then “United Telephone Company”, and he worked for them for over three decades until his retirement in 2008. Dean’s work ethic and dedication was unmatched. He would never refuse a “call out” and was one of the most honest people you would ever meet. He met many of his greatest friends during those years and will be missed by all of them. Two of Dean’s closest lifelong friends he met through work over the years were Neil Van Wyk and John Kaiser.

Dean married the love of his life, Sara Sue Easterly, on June 25, 1990. They enjoyed years together of hosting ropings at their home on VanBelle Road in Sunnyside, trail riding (on GreyLady and Dancer) in the mountains, vacationing at the NFR in Vegas, and many good times with their families and friends. The grandkids loved to come over and make cookies with Papa Dean and Gramma Sara, and they spent much precious time painting rocks and making wonderful memories in the arena that Dean and his brother Rick built and loved so much.

Dean was an avid Hunter and enjoyed many years up at elk camp in the Cowiche area. Dean and his best hunting buddy, Gary Thompson, from the west side very rarely came home empty handed. They enjoyed their evenings around the campfire telling their stories and sipping their Black Velvet.

Dean also enjoyed team roping. He made many friendships over the years with his team roping buddies. He enjoyed watching his kids and grandkids over the years excel at sports, and proudly watched his daughter Carrie compete at rodeo. Dean loved a flashy horse, a good western, a nice pair of boots, and a high quality saddle. One of the highlights of his life was meeting his childhood hero, Roy Rogers, while visiting his daughter Stacy in the high desert in Apple Valley, CA. He had stars in his eyes and Roy sought him out because he was the only one who showed up to his museum wearing a proper cowboy hat. They chatted for a while and he never forgot that.

Dean was baptized as one of Jehovah’s Witnesses on June 27, 1963. From that point on, his honorable cowboy qualities would be enhanced by his love for Jehovah and his son Jesus, as he put Bible principles foremost in his life. Much of his strength throughout his Parkinson’s battle was found in God’s sure promise of a renewed earthly paradise, and the hope in the resurrection to a young and healthy body. He loved to share that hope with others. (Revelation 21: 3, 4) Dean was deeply loved and cared for by so many, including his Grandview Christian Congregation of Jehovah’s Witnesses.

He is survived by his wife Sara of the home in Prosser; his three children; Sara’s children, who also helped love and care for him including daughter Paula (Shawn) Teevin of Vancouver, WA; son Jimmy (Adena) Easterly of Cool, CA; son Joey (Tonia) Easterly of Tigard, OR; and daughter Saralyn (Justin) Door of Selah, WA. He is also survived by his sister Donna (Robert) Holland of Hermiston, OR and Rick (Nita) Clark of Omak, WA. He was Papa Dean to his 19 grandchildren and 9 great grandchildren. He is also survived and loved deeply by numerous in-laws, nieces, and nephews.

Dean was preceded in death by his parents and bonus grandson, Nicholas James Franck.

Dean will be loved and missed greatly by anyone who had the pleasure of knowing him.

Meeting ID: 848 8462 8803
Passcode: Clarks
You may leave a message for the family at www.Prosserfuneralhome.com