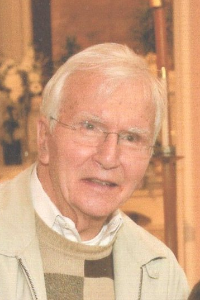 Salem
Richard A. Boucher passed away unexpectedly at the NSMC / Salem Hospital on Tuesday, August 9, 2022. He was the devoted husband of Janice M (Belleau) with whom he shared 62 years of marriage.
Born and raised in Salem, he was the son of the late Octave and Marie Louise (Paquette) Boucher. A Veteran of the Korean War, he served with the US Navy aboard the USS Lake Champlain aircraft carrier in the Mediterranean . Following his tour of duty he returned to Salem and worked as a machinist, tool and die maker for several companies on the North Shore. He eventually left tool making and started his own construction company making use of his many building skills, most especially carpentry.
For many years, Richard was a member of the Board of Directors of the former St. Joseph Credit Union, later to become Seaport Credit Union. During his 30 year tenure, he served as Chairman of the Board as well as in several other capacities.
The youngest of ten siblings, Richard, was a family man; proud of them and devoted to them. He enjoyed any time spent with his family and his large extended family. He was also a longtime member of the former St. Joseph Parish of Salem.
In addition to his wife Janice he is survived by their four children, Daniel R. Boucher and wife Anna of Everett, John E. Boucher of Salem, Timothy J Boucher and fiancée Christine Paiva of Salem, Monique B. Lamb, Esq. and husband Joseph of Danville, NH, three grandchildren, Ashley & Christopher Boucher of Everett, Kieran Lamb of Danville, NH and his sister, Noella Lachance of Beverly.
Relatives and friends are invited to his visiting hours, Wednesday, August 17, 2022, at the Levesque Funeral Home, 163 Lafayette St. [Route 114 / 1-A] from 8:30 to 10:30 AM to be followed by his Mass of Christian Burial in Ste. Anne Church, 290 Jefferson Ave., Salem at 11:00 AM. Burial and Military Honors will follow in St. Mary Cemetery.
In lieu of flowers, kindly contribute a memorial contribution to Parkinson’s Foundation, 1255 Soldiers Field Rd., Boston, MA 02135. For guestbook, please visit www.LevesqueFunerals.com