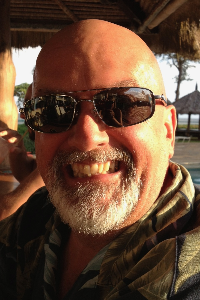 Jeffrey Alan Cook, 62, of Prosser, died peacefully at his home on August 10, 2022.
Jeff was born on August 14, 1959 in Roseburg, Oregon to Gerald and Constance (Thompson) Cook. The family lived in Tacoma before making their home in Prosser in 1961. While in high school he worked at Evans Market as a product stocker and box boy. Jeff graduated from Prosser High School with the Class of 1977. Jeff married Rose Marie Foster on October 6, 1984 in Prosser.
The Cook family began their hardware business in Roseburg, Oregon and continued in Tacoma. Coast to Coast sent them to Prosser where they have owned Cook’s Hardware since 1961. Jeff started working in the business the day after his high school graduation. He enjoyed working in the business and serving the community.
Jeff was a member of the Horse Heaven Sportsman Society, a lifetime member of the NRA and a member of the Lower Valley Canyon Crawlers. Jeff also served on the Prosser Cemetery Board for ten years. He loved the outdoors, motorcycles, Jeeping, drag racing, muscle cars, remote control cars, traveling and fishing. Most of all he loved spending time with his family, especially his grandchildren and attending their activities.
Jeff is survived by his wife of thirty-seven years, Rose; his daughter, Meagan (Justin) Hunsaker; his son, Scott Cook; and his granddaughters, Taylor Rose Hunsaker, Kapri Fayth Cook and Brystol Jane Hunsaker all of Prosser; his sister, Linda Lorentsen of Renton; his in-laws, Errett and Novella Grant of Idaho; sister-in-law’s, Debra Hewell Bell of Tennessee, Kathey (Gary) McClure of Prosser and Rita McClure Steelman (Cliff) of Prosser; brother-in-law, Norman Foster of Idaho; numerous nieces and nephews and other extended family. He was preceded in death by his parents and his brother, Ray Lorentsen.
A Celebration of his life will be held on at 11:00 Friday, August 19th at Bethel Church in Prosser. Casual dress is preferred and if you would like to bring a dessert for the reception it would be appreciated. Memorial contributions may be made to Mustangs for Mustangs. You may leave a message for the family at www.Prosserfuneralhome.com