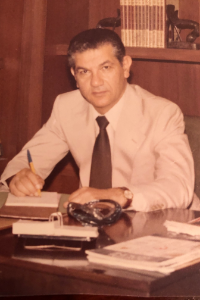 Dr. Razmik Sirakian passed away on August 7, 2022, after being hospitalized for injuries he sustained in a motor vehicle accident. He was a brilliant and accomplished surgeon as well as a warm and loving father, husband, brother, and friend.
Dr. Sirakian was born on November 15, 1930, in Tehran, Iran, to Mariam and Arshavir Der Sirakian, one of seven children. His mother died at childbirth. He was raised by his father, but due to family circumstances, he spent two years in an orphanage in Isfahan. He excelled academically and was sponsored by a loving Armenian couple, Hrand and Miranaz Shetdikian, who supported his aspiration to become a physician. He moved back to Tehran, attended Alborz High School, and graduated from Tehran University Medical School with distinction. He continued his education and training in Edinburgh, Scotland, where he specialized in general surgery and became a member of The Royal College of Surgeons. While in the United Kingdom, he met Meda Abrahamian, and they were married and had two sons. After a few years in London, they returned to Iran, where Dr. Sirakian became the chief of surgery at Arad Hospital, maintained a private practice, and cared for thousands of patients during a career spanning five decades.
He was a highly regarded member of the medical community in Tehran, a talented clinician and beloved physician who was devoted to the health and wellness of his patients. His many accomplishments included collaborating with Japanese colleagues to introduce endoscopy to medicine in Iran. He also volunteered his services during several regional military conflicts, spearheading the establishment of multiple Mobile Army Surgical Hospitals at the frontlines and serving as an onsite surgeon to save the lives of wounded soldiers. He was a dedicated member of the Armenian community, supporting the work of many Armenian humanitarian organizations.
After his retirement, he relocated to Lexington, Massachusetts to spend more time with his family. He enjoyed books, long walks, nature, wine, good food, family, and friends.
He was always extremely generous, kind, and committed to helping those in need.
He is survived by his wife Meda, his sons Aram and Edward, his daughters-in-law Asi and Yvette, his grandchildren Eric and Alec, his brother Vrej Sahakian, his sister Rosa Soukiasian, and many nieces and nephews.
At the request of his family there will be visiting hours on Monday, August 15th from 6 to 9 pm at Bedrosian Funeral Home in Watertown, Massachusetts. Funeral services will be private.

In lieu of flowers, donations in Dr. Sirakian’s memory can be made to Hand in Hand (providing free dental care for children in all regions of Artsakh since 1997), Armenian Bone Marrow Foundation, or St. Stephens Armenian church in Watertown, Massachusetts.