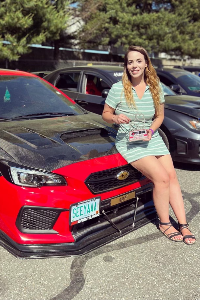 Brianna M. Eldredge, 23, of Pelham, NH, died Saturday, August 6, 2022 from injuries sustained in an auto accident in Bath, NH. She was born in Derry, NH on October 10, 1998, a daughter of Steven and Kim (Oliveri) Eldredge. Brianna was most recently a resident of Pelham and formerly lived in Derry. She attended school in Derry and graduated from Pelham High School. Brianna was employed as a kitchen designer for Cyr Lumber in Windham.

Her biggest passion was for her Subaru WRX STI, and her car groups friends. They supported and loved her and broke her out of her shell. She won numerous awards for the great care and pride she took maintaining her car.

Brianna was caring and adventurous. She had a love of turtles and made plans to travel the world with the love of her life to see it all. A beautiful women inside and out who has become an angel now.

Above all, Brianna loved her close-knit family dearly. She was fiercely loyal to them as well as her friends. The loss of Brianna is felt immensely by many.

In addition to her parents of Pelham, she is survived by her brothers, Nicholas Eldredge of Ft. Drum, NY, and Kyle Eldredge of Pelham; her grandparents, Arlene Oliveri of Methuen, MA; and Dennis and Joan Barnaby of South Carolina; her aunts and uncles, Dawn Oliveri, Richard and Jess Oliveri, Gina and Chris Tripp, Anthony Oliveri, Lillian Oliveri, Deanna and Brian Simmons, John Eldredge, William Eldredge, and Tommy Barnaby; as well as several cousins. She was predeceased by her grandfathers, Richard Oliveri and William Eldredge Sr.

Calling hours will be held on Sunday, August 14th from 1:00 - 5:00pm in the Peabody Funeral Homes and Crematorium, 290 Mammoth Rd., Londonderry, NH. Mask usage is at the discretion of the attendee.
A Mass of Christian Burial will be celebrated on Monday, August 15th at 10:00am in St. Matthews Church, 2 Searles Rd., Windham, NH. As the church has morning Mass, attendees are asked to not enter the church prior to 9:45am. The burial will follow in Gibson Cemetery, Pelham. In lieu of flowers, memorial contributions can be made to the Turtle Rescue League. More information is online at turtlerescueleague.org.