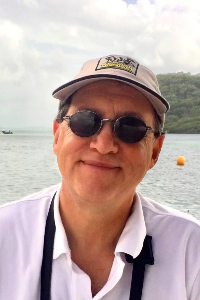 David Scott Wright, aged 70, of Winchester, MA died on August 6, 2022 following a 9-month battle with pancreatic cancer. He was the loving and devoted husband of Debra (Dionne) Wright and beloved father of Amy Wright (and her husband Alex Nicholson).

David was born January 14, 1952 in Sanford, ME, the oldest of five children to Priscilla (White) and William Wright. His early life was spent exploring the Maine woods and waters, fishing, skiing, hiking, and generally getting into mischief while forging lifelong friendships. After graduating from Sanford High School, he spent two years studying at Carlton College, later finishing his BS in Management at the University of New Hampshire.

David’s successful career was varied and reflected his many interests. After his time at Carlton College, he spent a year in Japan teaching English. An accomplished photographer since his teenage years, he worked at and later owned Sweet Potato, a highly influential music magazine in northern New England. In the 1980s, he was the COO/CIO of Daddy’s Junky Music Stores, helping the company grow from a small musical instrument retailer to the 15th largest in the country. He then worked as the Marketing Director at Datacube before shifting his career to Management Consulting, where he thrived working with leaders of a wide range of business and governmental organizations, improving their systems and operations.

Throughout his life, David was committed to extending his hand to others. There are too many stories to recount, but in later years this included hiring and helping to kickstart the IT career of a barista he befriended during his morning coffee runs, and mentoring a young man from Nepal he met at a local restaurant who became like a son to him. A hugely generous, optimistic, and open man without any ego, David mentored and shaped the careers and lives of many. We are blessed to know that his influence - and desire to give freely - will live on through the example he set for his many friends, family, and colleagues.

David had an incredible zest for life and adventure, and an ability to make even the simplest moments special. A voracious reader and learner, he was an inquisitive man with many interests and hobbies. Even during his illness, he claimed that he had never once been bored in his life. He was very skilled at photography, woodworking, carpentry, home remodeling, and gardening - meaning there was always a project or several keeping him occupied. Despite his love of many things, his greatest joy was travelling with and spending time with his family.

He is survived by his wife Debra Wright of Winchester, MA and daughter Amy Wright (Alex Nicholson) of London, UK. He leaves behind siblings Leslie O’Flaherty of Grafton, MA, Marcia (Larry) Roepke of Grand Marais, MN, Ryan Wright of Orange City, FL, and Phyllis Wright of Minneapolis, MN, as well as several nieces and nephews, and a large community of devoted friends.

There will be a celebration of his wonderful life this fall, details to follow. A mentorship program will be set up in his memory in the coming months.

Donations may be made in David’s memory to PanCAN https://pancan.org to support pancreatic cancer research or by donating to or sponsoring a child through World Vision https://worldvision.org
a program that spoke directly to his belief in helping the world, one person at a time.