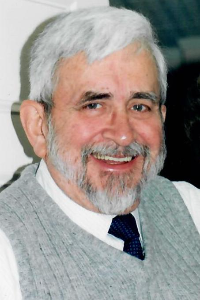 Don was a Federal Air Traffic Controller for over 35 years at Worcester and other regional airports before retiring in 1986.

He was born in Worcester, the son of Douglas T. and Elsa E. (Larson) Cherry, Sr. and later graduated from Leicester High School and Worcester State College. He then went on to serve his country with the U.S. Air Force stationed in Japan during the Korean War.

He was a member and Senior Warden of Christ Episcopal Church, Trustee and member of the Renovation and Building Committees for the Leicester Public Library. At one time, he was a Boy Scout and Cub Scout Leader for Troop 115 in Leicester. He served for many years on the Independent Review Board at St. Vincent Hospital.

His greatest love was his family. He especially loved spending time with them at the cottage on Lovewell Pond in Fryeburg, ME that he and Teena rebuilt together.

His family wishes to thank Dr. Reynolds and the staff on 7 East at U Mass University Campus and the staff at Rose Monahan Hospice Home who provided such compassionate care in his final days.

Don's funeral will be held on Thursday, Aug. 11th. at 10 a.m. in Christ Episcopal Church, 1089 Stafford St., Rochdale. Burial, with Military Honors will follow in Worcester County Memorial Park, Paxton. Calling hours at the MORIN FUNERAL HOME, 1131 Main St., Leicester are Wednesday from 4 to 7 p.m. In lieu of flowers, contributions may be made to the Leicester Public Library Trustees, 1136 Main St., Leicester, MA 01524.