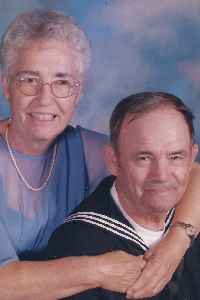 Dale was born in Port Orchard, Washington in 1939 to Richard C. Brauhn and Vera L. Brauhn (McDonald) and was the second of eight children.
Growing up he found a love for horses and would frequently ride his bicycle to the Long Acres Racetrack and help walk the horses. When Dale was 17 years old, his father signed for him to join the Navy, where he spent the next four years in active duty at various places, including The Pacific Islands, Alaska, and Port Hueneme in California. Dale left the military in 1960 and met his wife, Joe (Lucy Josephine Bofman) in 1961 in Sunnyside, Washington; three months later, they married.
Dale and Joe moved to Machias, Washington in 1963 where Dale worked with racehorse trainers; in 1963 they welcomed their first born, Annette Charlene, eventually Dale left the racehorse world and went to work for Olympia Stone. In July 1966 Dale and Joe welcomed their second child, Angela Marie; in 1969 Dale had a serious accident at work which left him disabled. Eventually the family settled in Sunnyside, Washington and welcomed their third child Danny Allen in 1977. The family stayed in the Sunnyside area for the next 13 years when they decided to move to Brookings Oregon, eventually Dale and Joe ended up in Salem, Oregon. In 2009 Dale lost his beloved wife after a long battle with Alzheimer’s; Dale remained in Salem until 2020 when his health was declining and moved to Prosser, Washington.
Throughout Dale’s life he often volunteered for various organizations, in the early 70’s he was a part of the Jaycee’s, in the late 70’s he worked with an agency in Sunnyside (Hope Enterprises) that worked with people with disabilities. In the early 2000’s Dale started advocating for Veterans and worked with the National Guard in Salem helping current military and veterans understand what benefits they were or would be eligible for through the VA and how to navigate the processes. Eventually he had to step back from volunteering as his wife’s health declined.
Dale is proceeded in death by his wife Joe (Lucy), brothers Chuck (Charles), Jack, and Frank and two sisters, Diane and Mary Ann. He survived by his three children, Annette Jones (Theron) of Prosser Washington; Angela Gomez (Rick) of Emmett, Idaho; and Danny Brauhn of Salem Oregon; seven grandchildren, and 10 great-grandchildren, as well as two sisters, Glenda and Sandra.
Dale will be laid to rest in the Willamette National Cemetery in Portland, Oregon next to his wife on August 18, 2022 at 11:00 a.m. You may leave a message for the family at www.prosserfuneralhome.com.