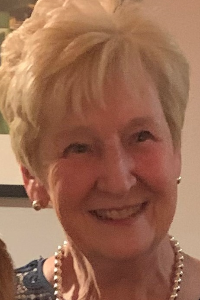 PAXTON: Gail Carolyn (Agnew) Lock, 75, of Paxton, passed away peacefully surrounded by her loving family on Friday, August 5th at her home, following a long illness.
She leaves her husband of 53 years, John Paul Lock, MD, her son; John Paul Lock and his wife Melissa of Malvern, PA., her daughters; Jennifer L. Beauvais and her husband Ed of Hopkinton, and Kathleen M. Mancini and her husband Jon of Barrington, RI., her beloved grandchildren; Julia, Isabel, Kate, Matthew, Marc, James and Sadie, her brothers; Donald Agnew of Paxton and John Agnew and his wife Terry of Spencer, her sisters Jean Bouzan and her husband John of Natick and Patricia White and her husband Peter of Spencer, many nieces and nephews.
Gail was a 1st & 2nd grade educator for over 25 years at the Paxton Center School, where she touched the lives of numerous children, before retiring in 2007. She also was an assistant librarian at the Richard Sugden Library in Spencer prior to becoming an educator. Following her retirement, Gail dedicated significant time sewing dresses for impoverished children as part of The Haiti Project. She was an active member of The Paxton Women’s Club that raised money for the annual scholarship program. Gail was also a proud member of the Massachusetts Teachers Association. Above and beyond all her professional activities, Gail’s true passion remained being a devoted and loving “Nana” to all her grandchildren.
She was born in Worcester, the daughter of the late Nelson and Marion (Brodeur) Agnew and later graduated from David Prouty High School in Spencer in 1964. She went on to earn her bachelor's degree from Worcester State University in 1968. She was a communicant of St. Columba Church.
Gail's funeral will be held on Friday, August 12th from the J.HENRI MORIN & SON FUNERAL HOME, 23 Maple Terrace, Spencer with a Funeral Mass at 10 a.m. in St. Columba Church, 18 Richards Avenue, Paxton. Friends are asked to go directly to the church. Calling hours are Thursday, August 11th, from 4 to 7 p.m. in the funeral home. Burial will be in Mary, Queen of the Rosary Cemetery, Spencer following the Funeral Mass. In lieu of flowers, contributions may be made to St. Columba Parish, 18 Richards Ave, Paxton, 01612 or Jewish Healthcare Hospice, 646 Salisbury Street., Worcester, MA 01609.