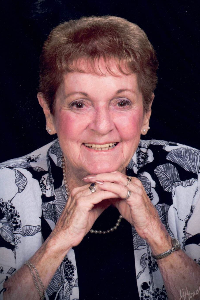 Verna Evelyn Elwell, 89, of Derry, NH, passed away on August 5, 2022, surrounded by loved ones at Parkland Medical Center in Derry, NH.

Born to Forrest and Idella (Crowley) Welch on November 9, 1932, Verna was a cherished daughter and sister from a loving family. Verna helped to keep the peace between her siblings and care for her youngest brother. It was during her childhood in Lynn, Massachusetts that Verna learned to sew and continued to develop her skills, later, working as a skillful seamstress, even fashioning clothes for her children.

While juggling the demands of working outside of the home, Verna raised four wonderful children, first in Tewksbury, Massachusetts before relocating to Derry, New Hampshire. She was their constant cheerleader in sports and school and, later, supporting them as they built families and pursued careers.

Verna was a devoted wife. She married the love of her life, Gerald “Jed” Elwell, in 1983 and relocated to Pompano Beach, Florida. For two decades, Jed and Verna spent most of the year cruising around in their boat, the VeeGee. Their cat, Holly, was their constant companion. Verna loved to dance. She and Jed spent many nights at the local VFW showing off their moves.
As a doting grandmother, Verna could be found cheering on the sidelines at sporting events or beaming in the stands at high school, college and military graduations. She frequently expressed her pride for her grandchildren and often cheekily added that they got their smarts or athletic abilities from her. Verna took a great deal of joy from simply watching her great grandchildren play and being called “Grammie Ma” as her grandmother had been called.

From early Spring into late Fall, Verna’s evenings were spent cheering on her beloved Red Sox. She attended a game from time to time and, on one occasion, her “Sweet Caroline” dancing antics landed her on the big screen.

Verna was a friend to everyone she met. It was not unusual to hear her exclaim, “I’m a hugger!” upon meeting someone new. She was an active member of First Parish Church, often volunteering to welcome people to morning services and spaghetti suppers and manning the punch bowl at receptions. She never missed a Keep In Touch gathering if she could avoid it. In her many years living at Nutfield Heights, Verna went on countless outings with fellow residents and friends, and she was a regular at events, such as potlucks, movie, and game nights.

Verna will be dearly missed by all those that knew her and loved her. She is survived by her four children and their spouses: Gail and Carl Hepworth of Derry, NH, Richard and Diane Little of Derry, NH, Frank and Darcy Little of Concord, NH, and David and Melissa Little of Canterbury, CT; her brother and his spouse, Stephen & Carol Welch of Gilford, NH, nieces and nephews, as well as 14 grandchildren, 15 great grandchildren, and many more that affectionately called her Grammie V. Verna was predeceased by her husband of 23 years, Gerald Elwell, and two brothers, Robert and Melvin Welch.

Calling hours will be held on Friday, August 26, 2022 from 6:00 PM to 8:00 PM in the Peabody Funeral Homes & Crematorium, 15 Birch St., Derry. Verna’s life will be celebrated on Saturday August 27th at 10:00 AM at First Parish Congregational Church, 47 East Derry Rd., E. Derry. Mask usage at the funeral home and the Church is at the discretion of the attendee. The burial will be in NH State Veterans Cemetery, Boscawen, NH at a later date. In lieu of flowers, memorial contributions may be made in Verna’s memory to the New Hampshire Down Syndrome Association or the First Parish Congregational Church Building Rehabilitation Fund.