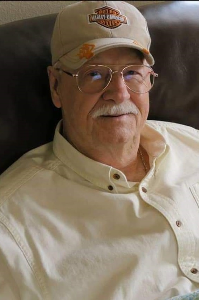 He worked production at Delco Remy for 30 years before retiring in 1992. He served as a union representative, committeeman and helped organize the annual Christmas gathering for kids. He was also a Sheriff Deputy in Madison County for 22 years.

He was a member of Anderson Corvette Club; Fellowship Masonic Lodge, First Church of the Nazarene, was an auctioneer, loved fishing and camping. He was an excellent cook and enjoyed spending time with family.

He was preceded in death by his parents, Charles Gordon and Ina A. (Mitchell) Price; his wife, Linda Kay Price in November 2021; mother-in-law and father-in-law, Bill and Charlotte Remley; two brothers, Bobby Price and Charles Price; two brothers-in-law, Lonnie McClendon and Jim Remley.

A funeral service will be at 2:00 p.m. on Friday, August 12, 2022 at Rozelle-Johnson Funeral Service with Ned Clark officiating. A Masonic service will be held at beginning of the funeral by Fellowship Masonic Lodge. The burial will follow at East Maplewood Cemetery.

Memorial contributions may be given to Riley's Hospital for Children.