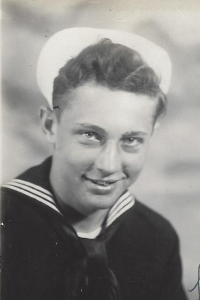 He was born on April 16, 1927 in the Wilsonville section of Thompson, CT, a son of John and Mary D. (Majercik) Stefanik and was a 1944 graduate of Bartlett High School. He received his Bachelor’s degree in Pharmacy from the New England College of Pharmacy in Boston.

He was a Navy veteran of World War II and a life member of the Webster-Dudley American Legion Post #184.

Mr. Stefanik owned and operated TonyLea Pharmacy in Webster and later worked at the Fallon Pharmacy, Worcester. He retired at the age of 80 in 2007.

He was a member of Sacred Heart of Jesus Church and a life member of the Auburn-Webster Lodge of Elks #1466. He enjoyed fishing, golf, playing pitch and his daily trip to the Senior Center. He was a long-time fan of the New England Patriots and the Boston Red Sox.

Services will be held privately at the convenience of the family. Donations in his name may be made to the Webster-Dudley Veteran’s Council, 4 Veteran’s Way, Webster, MA 01570. Funeral arrangements are under the direction of Sitkowski, Malboeuf & Hickey Funeral Home, 340 School Street, Webster.