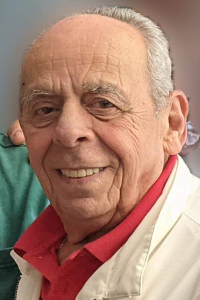 WIlliam A. Spirito, age 87, of Tewksbury passed away on Tuesday, August 2nd, in Melrose/Wakefield Hospital. Born and raised in Medford, he was the son of the late Nicholas and Concetta (Spinetti) Spirito. William proudly served in the Army in the late 1950s, after which he worked as a barber, and later as the Shop Steward at the UPS facility in Logan Airport. William loved cigars and Amaretto, Music, golf, and watching all New England sports teams. He was also a great artist, enjoyed keeping up his garden, and loved his scratch tickets.

A funeral mass will be celebrated in St. Francis of Assisi Church, 441 Fellsway West, Medford, on Saturday, August 6th at 11:30 AM. Relatives and friends are respectfully invited to attend and may visit with family in the Dello Russo Funeral Home, 306 Main St., Medford from 9 through 11 AM. Interment will be private.