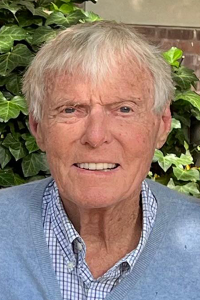 He is also survived by his four grandchildren, George and Lucy Pike, Olivia and Nicholas Mason, and his three step-grandchildren, Logan and Lili Pike, and Emily Mason.

The son of George L. Unhoch, Sr. and Anna (Feldmann) Unhoch, George was born in Bayside, Queens, New York, and went to the Foxwood School in Flushing, Queens and the Choate School in Wallingford, CT. He was the first in his family to go to college, graduating from Yale University in 1956 with a degree in economics. He played on the varsity squash team at Yale.

After his graduation, George joined the family business, the New Bedford Thread Company, founded by his father in 1953.

The business made glace finish cotton sewing thread. George took over as president in January 1970 and built New Bedford Thread into a global brand name that survives until this day. He ran the company for 50 years, until its sale at the end of 2019.

From 1989 to 2001, George also owned and ran A.H. Rice & Co., a uniform braid business based in Pittsfield, Massachusetts.

An avid swimmer, George did laps in his pool everyday right up until just ten days before his death. An even more passionate golfer, he won numerous tournaments at his beloved Kittansett Club, where he served on the board for many years.

He was a parishioner and staunch supporter of Saint Gabriel’s Episcopal Church, where his funeral service will be held at 11 am on Saturday August 20th, reception to follow.

Contributions in his memory may be made to: www.southcoast.org/visiting-nurse-association/donate/. For online condolence book, please visit www.saundersdwyer.com.