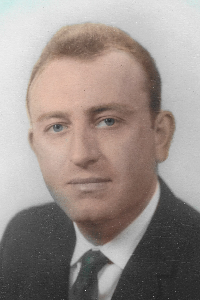 Joe was born on August 1, 1941 in Mirabella Eclano, Avellino Italy, the son of Virgilio and Antonia Indresano. He grew up in Italy and worked on the family farm until the age of 16. At that young age, he traveled to America to make a better life for himself working for his uncle’s company, Indresano Oil. In 1968, he returned to Italy and married his loving wife of 54 years, Angela. They moved to Natick, MA where their four children were born and raised.

Joe started his own landscaping business with a single customer and a lawn mower in the trunk of his car. Through the years, he grew his business to hundreds of customers. With skilled hands and his care, he crafted beautiful landscapes and they appreciated his professionalism, attention to detail, and his friendships with them. Although Joe retired from the business, he still kept busy landscaping his own property. Twenty years later, the business continues to thrive in his family’s name.

As a member of the Italo-American Club in Wellesley, MA, he enjoyed spending time with friends competing in bocce tournaments and over the years served as the Treasurer and President of the club. Joe was also an avid soccer fan, always cheering for the Italian team.

He spent his summers on Cape Cod and a favorite past time was being near the water and watching the boats and ferries go by. With a fondness for everything Italian, he enjoyed his annual trips to Italy, the taste of his homemade wine, a “short” espresso and all the delicious pasta dishes his wife prepared for him out of love. He also had a deep devotion to his faith, but his greatest joy in life was being with his family, who he loved deeply.

Joe is survived by his wife Angela; his son Virgilio; his daughter Antonia, her fiancé Scott and his daughter Brooke; his son Joseph; and his daughter Diana and her husband David. He is also survived by five adoring grandchildren: Isabella, Sofia, Marissa, Joseph and Louis; as well as his sisters Maria and Sabina, a predeceased brother, Emanuelle and several nieces and nephews. He will be dearly missed.

Services will be held in his hometown of MIrabella Eclano, Avellino Italy.